„I am what is around me.”
/Wallace Stevens: Theory/

Only after viewing the György Jovánovics exhibition in Balatonfüred did I realise that every day, I pass the image of an alchemist’s workshop in my home. In the kitchen, right by the fridge, hangs a plate that I scavenged from a German junkshop about 4 years ago. The plate shows a scene from an alchemist’s workshop with a plethora of interesting objects, gurgling flasks, a busy main character, fixing up something from a recipe, and another character fanning the coals in the background. Up on the right, there is a sharp gap the size of a horse’s eye: the plate once broke, and the plate’s edge, decorated with animal skull, has been waiting for the reunification ever since, hidden in my desk drawer. “Der Alchemist – Holzschnitt nach einem Gemälde von David Teniers 1750” – states the inscription. That is, the image described above has been transferred onto the porcelain plate from a woodcut based on David Teniers’ painting The Alchemist. The plate is hand-painted, but that is beside the point. By now it’s probably evident to the reader that this piece doesn’t hang on my wall because it’s a great work of art. It earned its place because of the mystery, begging to be solved, that has permeated every depiction of the alchemist’s lab for centuries. 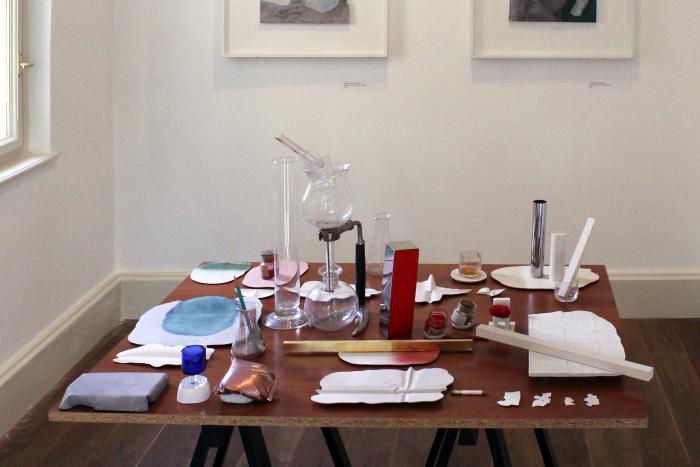 This same intense compulsion to decode – which can be seen as an extreme version of the constant urge to interpret – was what took over me when I first encountered György Jovánovics’s work The Alchemist’s Table (2015) in Balatonfüred. A tiny copper pad, sensitive little bottles, soft powders, red paint, a green pencil, transformable flask-constructions, plaster casts of diverse colours and surfaces, and various other materials are placed side by side on a very contemporary workbench.

For a while, the presence of the plaster reliefs marked “A.D.” and “J.Gy.” provided the solution I was looking for: the alchemists, in this case, were Jovánovics himself and Albrecht Dürer, whose works were exhibited in the adjacent room. My initial thought then got mixed in with milieus waiting to be decoded, like the ones depicted on my Teniers-plate, or in some of the works by Dürer (such as the copperplate Melancholy I.) on view next door. I was looking for the common element, to understand how this table – and Jovánovics’s exhibition at large – relates to the theme of alchemy. While for Dürer – and even Teniers, who created his works much later –, alchemist ideas formed part of the zeitgeist, in the case of a contemporary Hungarian artist, they aren’t an obvious point of reference. 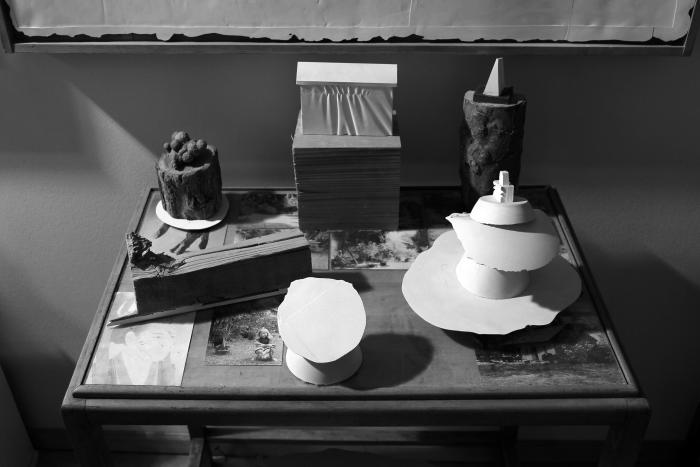 An Autobiography – this is the subtitle of the exhibition, suggesting that after viewing the pieces of this oeuvre spread over two stories, and the works by Jovánovics’s predecessors and students, we are meant to end up with an idea of who the artist is. (In other words, the autobiography assumes a multitude of possible autobiographies.) I understood that The Alchemist’s Table plays a central role in this exhibition-portrait of the artist when I encountered and examined the other two table-installations on the Vaszary Villa’s upstairs loggia. The Sculptor’s Table (2015) was like a collection of ideas or projects, a three-dimensional notebook with six statuettes, including two, early-70s design ideas for the first Hungarian memorial of the Gypsy Holocaust, and the plan of the sarcophagus that is part of the Plot 301 monument. The toolkit and collection of designs presented on the first two tables were augmented by the Table of Masks: as counterpoints to the completely flat reliefs, it showcases masks that have been transformed through a variety of interventions.

The tables, presented as artworks, were transferred into the exhibition from Jovánovics’s studio, almost without alteration. Through these fragments of his studio’s interior, we receive a unique insight into the artist’s personalised artistic universe. This is very much in line with the curatorial concept, according to which “the exhibition, as a paraphrase of the classical Rodinean principles of presentation, juxtaposes finished artworks with sketches, drawings, and photographs, which are either a source of inspiration or works of art in their own right.” Much like the old depictions of alchemists’ laboratories, these tables also present a cluttered scene. The carefully selected and illustrated objects and the furniture underneath transmit complex information about their owner; thus, the artist’s personality (comprised of his tools and equipment), way of thinking, and creative methodology are made manifest through the interiors on view. Jovánovics’s wide-ranging praxis of creating objects is accompanied by a coherent philosophical/art historical system of reference. His typical sculpting material, plaster, previously mostly known as an auxiliary substance, receives a whole new quality in Jovánovics’s conceptual works (white and coloured moulds, reliefs, etc.) Therefore, the secret, experimental operation of the artist-as-alchemist is the process through which Jovánovics, the conceptual artist, creates his works and enables the transubstantiation of the meaningless materials or objects on his table (plaster casts, powdered paints, a piece of calcite, etc.) by attaching a concept or idea to them.