An exhibition of sculptures by Mona Zimen and paintings by György Király recently opened at the Stadtturm Galerie in Vielshofen, Bavaria, Germany.

At the opening, I undertook the task to introduce artist György Király to the German audience. He lives at the Art Colony of Szolnok, Hungary, founded in 1902 and renovated in 2021. The artists who work here have won their own studio through an application, which also provides them with housing. In exchange for the use of the studio, they are obliged to exhibit both in the country and abroad. György Király has known Mona Zimen since the late 2000s, when she began to work as an independent sculptor under the guidance of sculptor Sándor Dudás at the bronze-casting workshop in Csongrád. György Király also participated in the international symposia organised by Mona in Hof Grillenöd, Bavaria where she has her own studio. The present exhibition is also the result of their joint reflections and discussions.

The exhibition focuses on two themes in the art of György Király: the Tree-pictures play a significant role alongside the still-life object ensembles called Silences, which in the spirituality refer to the art of several masters well known in art history.

In all cases, the titles are of great importance to the artist – most of them are personal or art historical references. The infinite horizons and depths of Caspar David Friedrich or the delicate drawings of Hans Holbein are as important references in the light of György Király's Tree-drawings as are Alexander Hollan's works exploring similar themes. The minimalism of Agnes Martin, the abstractions of Callum Innes, or the room interiors of Vilhelm Hammershøi bathed in cold, northern light, where paintings placed high up in a low room, almost level with the ceiling, create surprise and dissonance with the horizon line of the silent, often lifelike movements of the female figures displayed, mainly from behind. All this has left as deep an imprint on György Király's work as the places where he was invited to work as an artist-in-residence. The archaeological remains of Pompeii, and more specifically the rich colours found in the wall frescoes, also contribute greatly to the artist's varied pictorial palette. 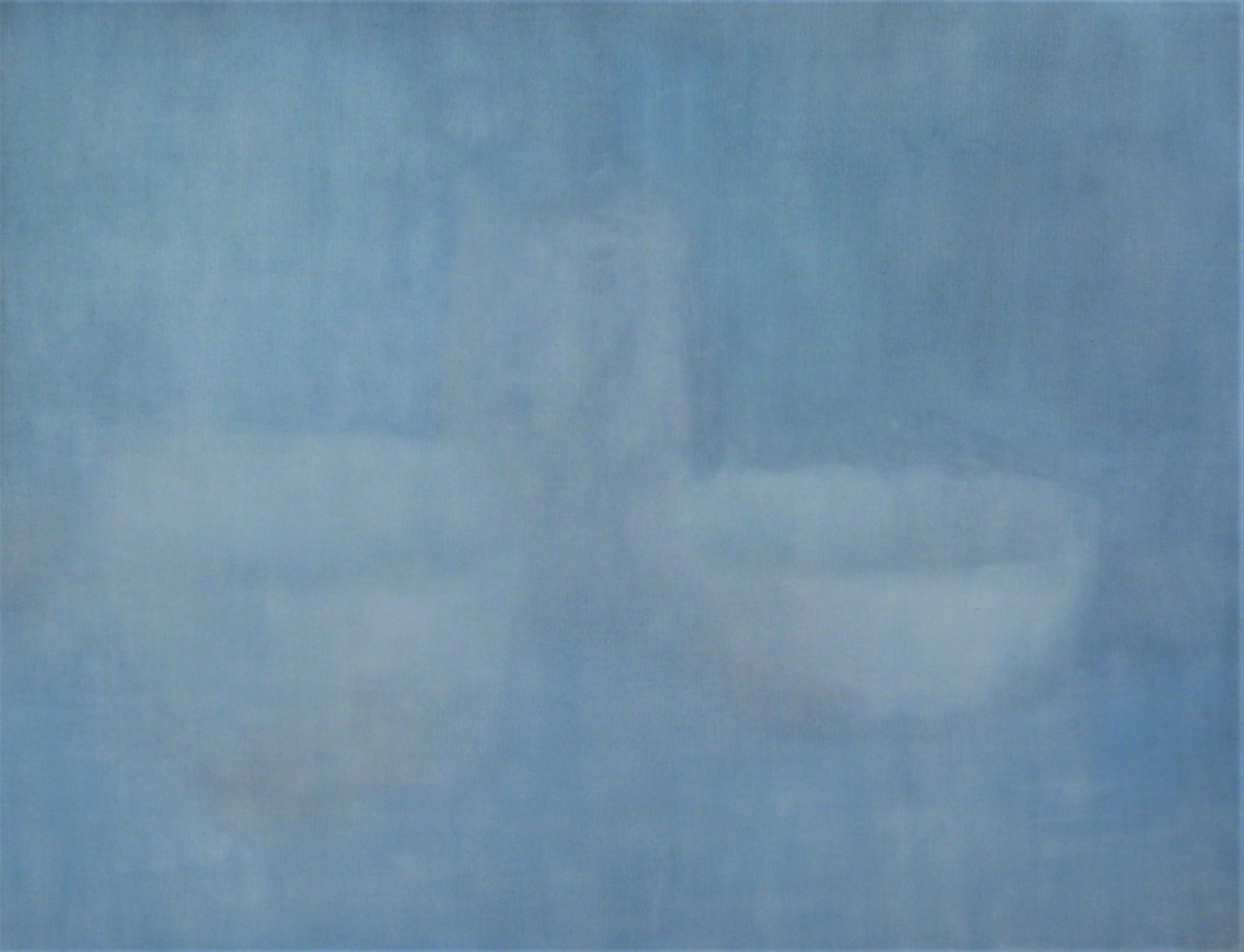 Visitors to the exhibition enter in a small lobby area and first see a charcoal drawing from the series of Silences, which in a way focus on abstract relations, one of the artist's themes. He explores a system of relations that reflects the interplay of size, colour and material of objects depicted in different tones, which, through the use of reflective colours and the representation of mass and contour, can be interpreted as a sociological study. The objects displayed in a group formulate a sense of community, a social experience into a vision, and become visual signs in their own right. As the light fades, the Silence paintings reflect the dissolving contours of everyday objects, mugs, cups, pots and pans placed side by side. Also in the lobby there is a representative of another prominent theme, made with mainly charcoal: a "portrait" of a pine tree is placed next to a figural sculpture of Mona Zimen. 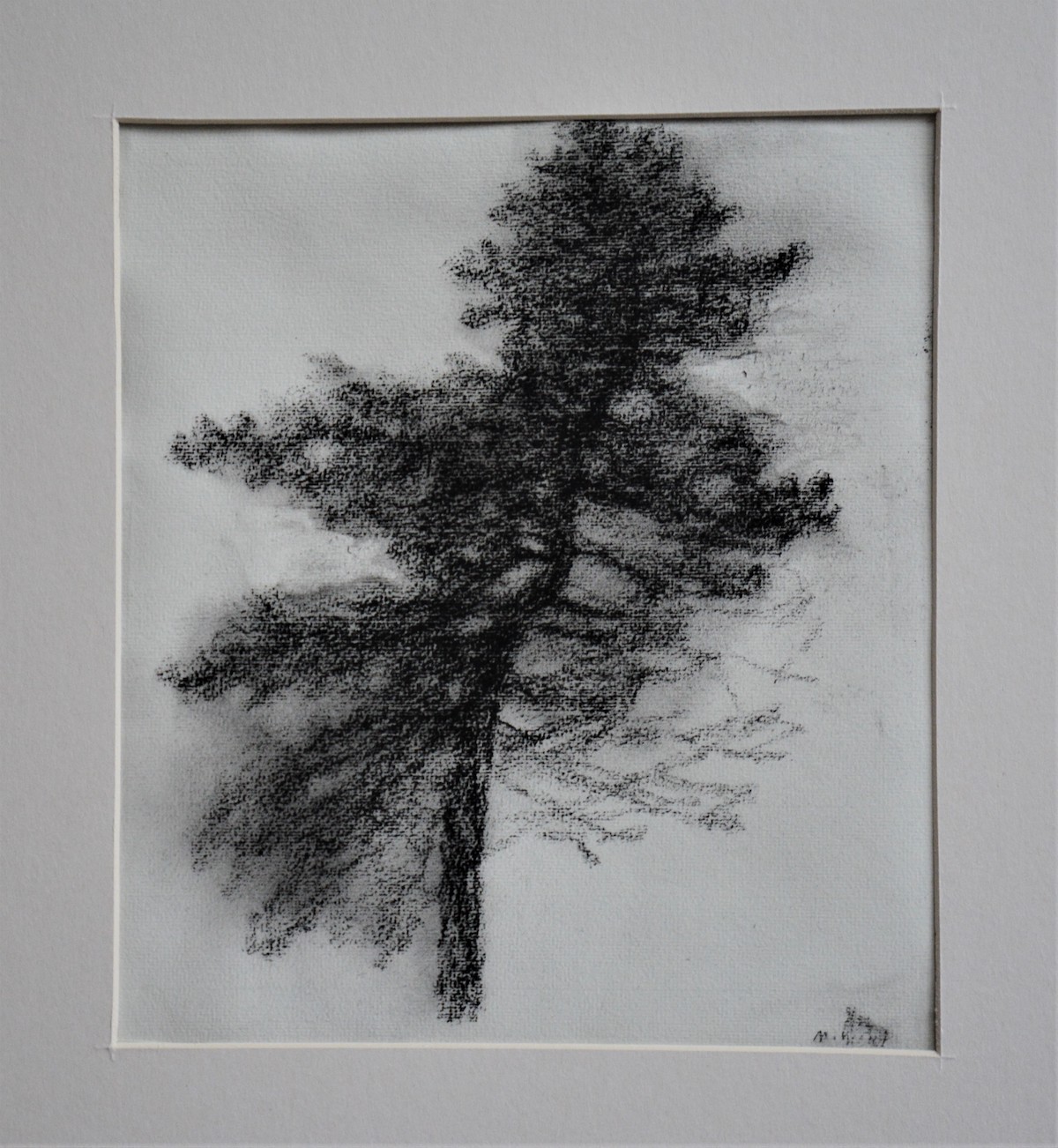 The use of charcoal is not limited to the representation of form, but rather the plasticity projected onto the geometrical plane. Its tones vary according to the effects that the artist is subjected to – often the sharp shadows created by bright light, at other times the artist is preoccupied with surfaces blurred by diffused light.

He is not interested in depicting concrete objects, but rather in the system of relations that, even in human relationships, results in the transfiguration and elevation of everyday objects, as motives, shifting them from corporeal to spiritual signs. In the following rooms of the exhibition, the artist presents his theme in several media, using different techniques. In György Király's watercolours, charcoal drawings and etchings, the memory of a group of objects is always expressed, structured in a very specific system of proportions. This process also frames the main subject that is to be outlined, while visually this frame is sometimes loosened by the softness of the white pigments, sometimes – and often precisely because of the characteristics of etching, but also as recognizable in the oil paintings – it expands the available space with sharp contours.

In terms of colour, György Király's work is also characterised by variety, although museums and private collections used to know and collect his blue pigment dominated paintings. In recent years, deep reds, earth tones muted by black, and then bright colour combinations have appeared in his work. 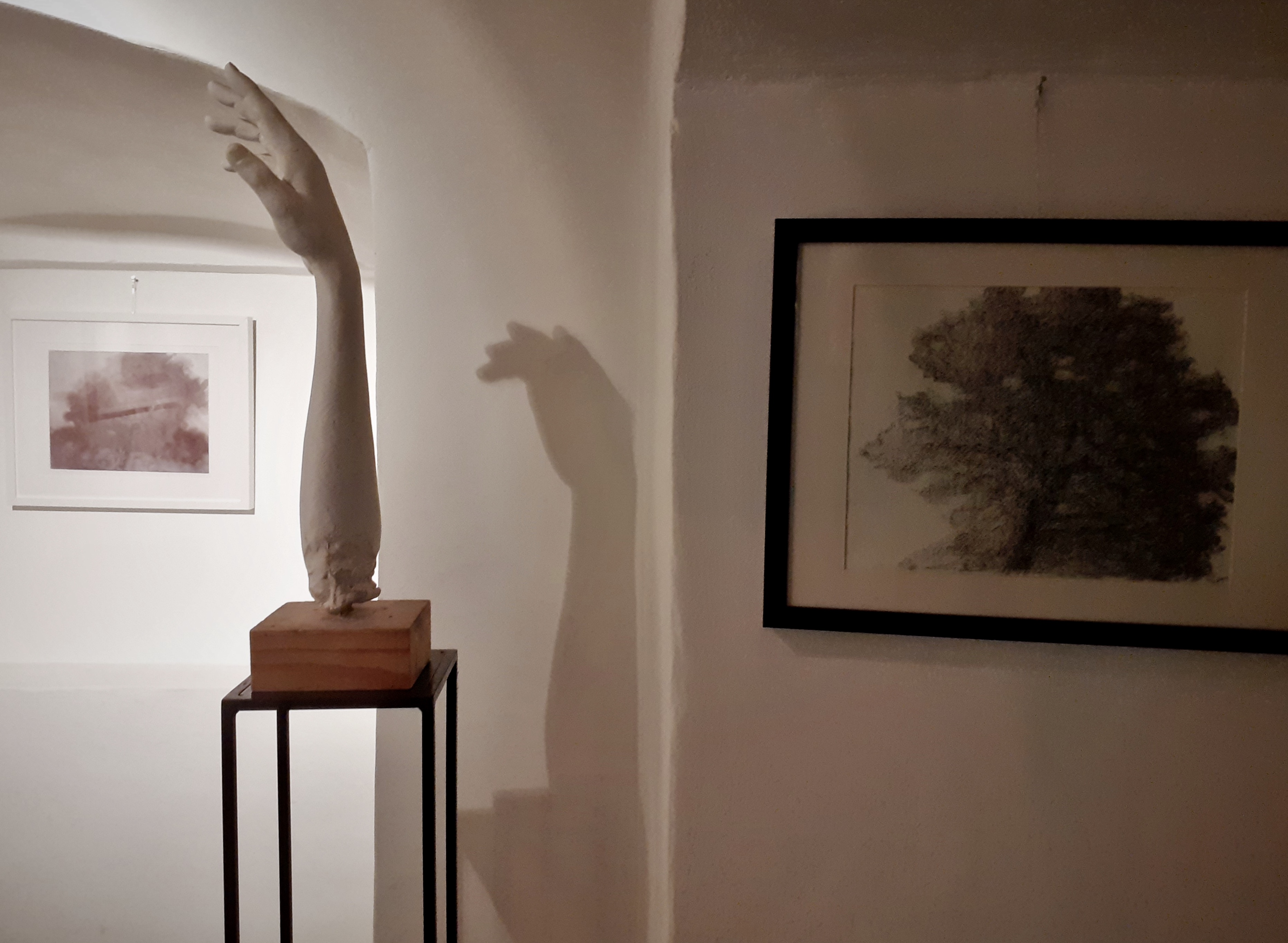 Excerpt from the exhibition

Connection as a theme is also present in Mona Zimen's sculptures, in the form of a mass of people or simply as a hand holding on, a sign whose interpretation always depends on the environment. In the current exhibition, Mona Zimen's Hand sculpture, inspired by ballet movements, is on the upper level, together with her work Genesis, which evokes prehistory and creation.

The parts of the human body in her sculptures partly refer to the world of ancient remains and torsos, and partly illuminate her sculptural way of thinking. They are the same crystallised nodes as György Király's shading of varying intensity. The two are linked by the treatment of light, or more precisely by its imprints.

The creative process of image-making in György Király's work, analysed through the sculpted ensembles of objects, is in dialogue with the sculptures that are not carved in stone, but modelled from clay, not taken away and dismantled, but built up from material. Mona Zimen not only builds and moulds her clay and plaster figures into personalities, but her torsos are equally active, acting individuals. Despite the absence of any part of their bodies, they are seen as an autonomous whole. The spatial compositions evoke the figures of Alberto Giacometti, the lone wolves of urban non-publics, hurrying along, watching each other but caged, their long strides going nowhere. Mona Zimen's portraits reflect the in-between existence between security and the search for a way, between intention and determination. The portraits, the defencelessness of the vulnerable bodies, remind me of the psychodramatist and psychiatrist Didier Anzieu, who in the 1980s analysed the function of the skin-self (moi-peau) as a means of self-protection and from there approached the presentation of the retaining power of groups (in the case of psychodrama groups). Here and then, the outer shell requires the existence of an absent but all the more elaborate inner core, it protects it, but without it: it does collapse. 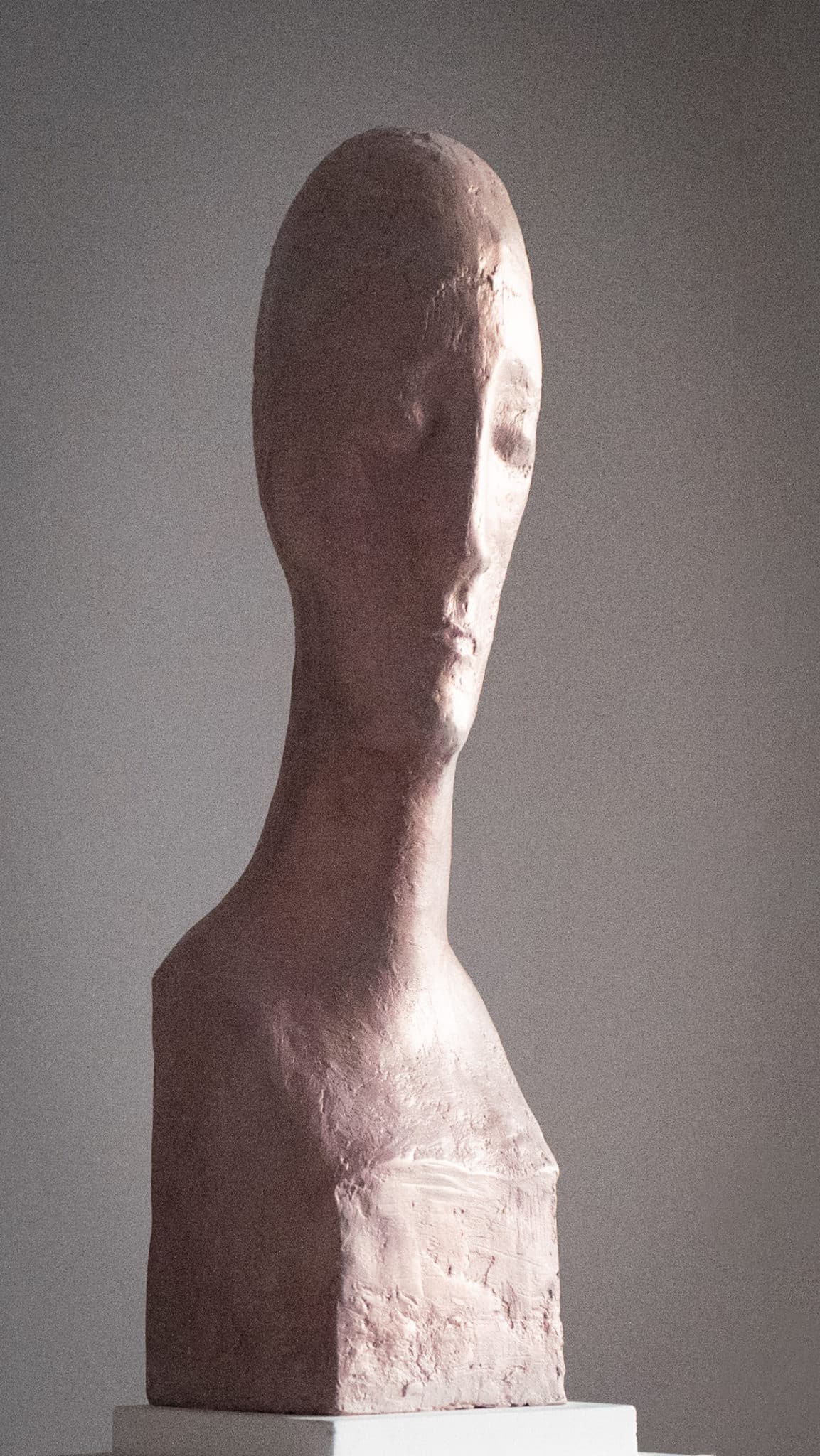 In psychological research, the tree is often an expression of self-identity, and tree-tests reveal detailed personality traits. I will not go into the analysis of the tree symbol, but it is a theme in some form in both artists’ works exhibiting here.

In the rooftop space of Stadtturm Galerie, viewers can see significant formulations of Tree-pictures by György Király, executed in various techniques (watercolour, charcoal), are showing all powerful, lonely giants on the hillside, braving the elements, wind, frost, bending in the storm, growing towards the light – as in the paintings of their predecessors that invoke their names. At different times of the year, we can see European oak trees in all the splendour of their canopy, or a bewitching member of the pine forests that evoke the northern regions.

Hermann Hesse's short story Piktor’s Metamorphosis [Piktors Verwändlungen] comes to mind, the need for change, the need to find a partner, to find oneself even in the most difficult circumstances. Through Piktor's longing, Hermann Hesse shows us the contrast that the spectacle of the harshness of extreme weather evokes in us, as we compare it with the warmth, peace and tranquillity of an intimate room.

What is it that is dearer to our hearts? Independence or being tied to a place, a community, a person?

Can we change our identity, our name, start a new life every time, put down roots, or will we forever seem rootless in a great circle? Is this in contrast to the joy of finding, of being found, to the certainty – and the constraint – of place, of home, of work, of a partner? Do we see in the other hand what he or she really is, or do we find in him or her ourselves, our self-will, our narcissistic identification? What is the goal? To seek or to find? To hide or to show? How long do we search the familiarity, the familiar objects of the room in the twilight of the evening? For how long do we grope its contours and where does uncertainty surprise us, where do we uncover our fears, our demons. How much strength does the warmth of our community, the people like us, give us, do we dare to step out into the unknown with that background? What are we afraid of? Who are we afraid of? Of ourselves, of the other? Of our self projected into the other, of strangeness? Of being outside ourselves? Of what is beyond our boundaries, beyond our field of vision, of crossing our boundaries and entering our personal space in such a way that we lose control? Or is our person already not whole and we do not assume in the other that it completes this lack?

Both artists lead us through their individual creative ways to turn inwards and to silence, contemplation, stillness and spiritual transcendence that the title of the exhibition suggests: Stille.

"When someone is searching,” – said Siddhartha, "then it might easily happen that the only thing his eyes still see is that what he searches for, that he is unable to find anything, to let anything enter his mind, because he always thinks of nothing but the object of his search, because he has a goal, because he is obsessed by the goal. Searching means: having a goal. But finding means: being free, being open, having no goal. You, oh venerable one, are perhaps indeed a searcher, because, striving for your goal, there are many things you don't see, which are directly in front of your eyes." (Hermann Hesse, Siddhartha)