Waliczky’s latest works, a 15-pieces print series and three animations, were exhibited in a solo show at the CMC Gallery, L3, Hong Kong. The 15 large-scale black-and-white computer graphics and the three animations depicted the virtual models of imaginary still and video cameras. To rephrase Jeffrey Shaw’s opening speech, these cameras are penultimate, hybrid formations born in the intersection of the analogue and the digital world, computer-based visions of a photographical bestiary, designs executed with the accuracy of an engraving, recalling the clumsiness of 19th-century inventors and the foresight of 21st-century innovators.
Waliczky’s works resemble the Neue Sachlichkeit’s objectivity, the Constructivism characteristic of Bauhaus designs and László Moholy-Nagy, or the world of kinetic sculptures, like István Harasztÿ’s oeuvre or Attila Csörgő’s mobile constructions. A notion of minimalism pervades the exhibition concept and the look of the spatial arrangement. The 15 large-scale prints are installed in the 400-square-meter exhibition space of the L3 Gallery— located in the Run Run Shaw Creative Media Center, designed by Daniel Libeskind and completed in 2011—on panels forming a circle, grouped along compositions and themes. The computer-generated 3D models appear on the prints in 2D, while the virtual cameras displayed on monitors can be spatially circled around, examined from each side and from several angles. Composing the horizon, the light- and warm-toned stripe on the panels pulls the wide space together into one flow, and provides background for the unframed prints, thus emphasizing them. The monitors, continuously repeating the animations, are installed on metal stands in the gallery’s inner circles, arranged, like propeller blades, in different directions, forcing visitors to circle around and change their points of view. The frameless and coverless computer graphics’ design, rich in details, can be examined from an intimate closeness. The simultaneous presence of the cameras both in images and on monitors is not a paradox, but part of Waliczky’s technical and visual experiments. 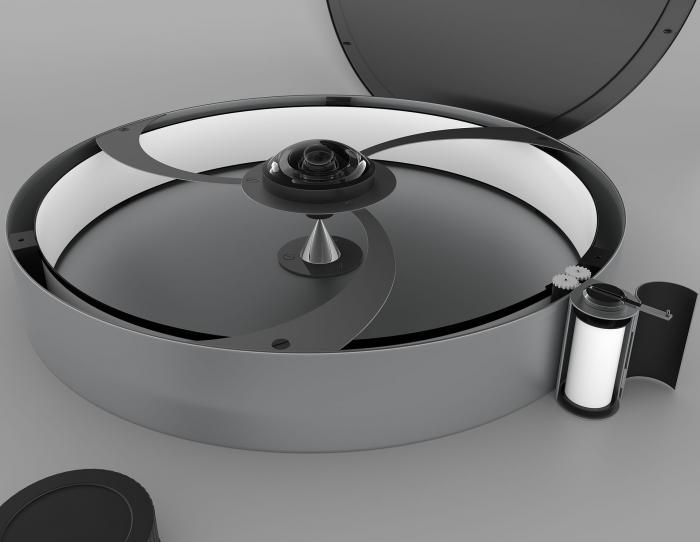 Artmagazin: Are you switching genres? You’re producing a graphic series of 3D models, displaying the result mainly on paper, instead of screens or projectors. Why do you consider these prints significant? What do these anthropomorphic machines mean to you?
Tamás Waliczky: Instead of a conscious decision, I’ve been busy with other works for a year, but didn’t like any of them. And then I came up with this, and it was something I liked. It seemed to be a new genre compared to what I had been involved with lately, but you’re perfectly aware that in 1989, 30 years ago or so, I already had a graphic series, entitled Machines. I’d rather say that I’ve returned to a previous genre, one I had got to like a lot back then. I began this series because it reminded me of my unusual childhood. My father was an amateur photographer, so our home used to be full with catalogs of photo cameras. Beside the fairy tales everyone knew, I also browsed these catalogs as a kid, and I fantasized about them, about how cool it would have been if I had one camera like that one, or that one. This is the language I’m familiar with, because this also has its language; the exposure time, the shutter, the lenses. I’m neither a camera repairer nor a technician, yet I grew up surrounded by this language, it has meaning to me. This is the personal background of these pictures. All my life, throughout my career, I’ve been interested in the perception of people. My works The Garden and Sculptures addressed the ways people see, sense reality. These machines are anthropomorphic—provided they are—in the sense that they demonstrate different modes of seeing, the fact that there could be more ways to see the world. And they demonstrate this somewhat ironically, clumsily, in the form of metal constructions, cameras that weren’t born yet, but could have been born, had photography developed in another direction. An alternate direction in development, that’s what recently has interested me. It comprises a bit of photo history, the examination of people’s perception, and my relation to childhood experiences. These together compose the series. 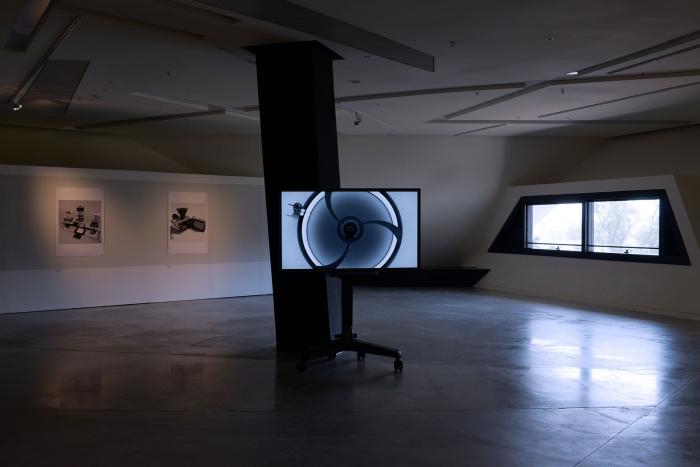 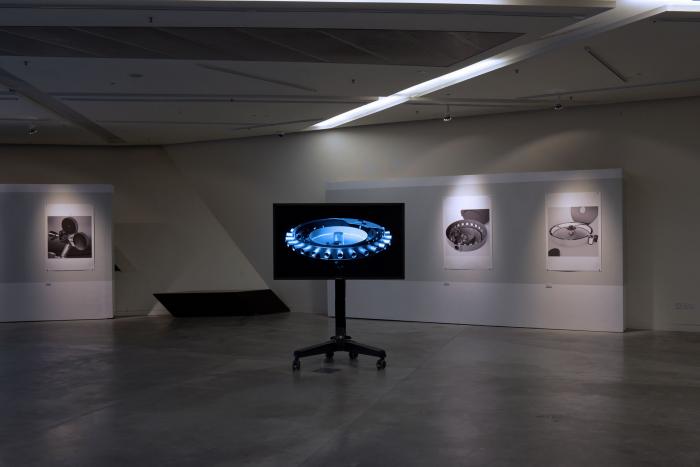 Artmagazin: You remodel cameras from the last century with the help of the most up-to-date digital technology. Isn’t it anachronistic returning to the beginning of media history like this ?

Tamás Waliczky: I made this graphic series because the history of media art begins with similar analogue constructions. The first time we mechanically simulated the human eye. Machines have largely changed the way we imagine our world. For example, the term acutance didn’t exist before the invention of optical lenses. Everything is sharp on a Renaissance painting. Today, sharp and blurry details belong to the compositional tools equipped by photographers.
To the best of my knowledge, the constructions depicted in the series do not exist. Either I came up with them, or I redesigned actual cameras of similar working mechanisms (Orthographic Camera, 2017). As I’m not familiar with the technical details of every camera, I imagined how I would build them (Glass-Plate Camera, 2017). One print (Mirror Camera, 2017) departs from a forgotten discovery from photo history, Wolcott’s mirror camera, 1840, and creates a new, non-existing film camera.
I had two goals by making the prints. On the one hand, I aimed at creating cameras that work, at designing every detail in order to make machines that are able to take photos or record movies. On the other hand, I intended the display of the details and the whole of the composition to be appropriate as far as my aesthetic criteria is concerned.
Throughout my oeuvre, a recurring motif is whether how we perceive the world and how we present it with the help of new technology. For instance, the 1987 Central Shutter addresses the photographic self-portrait, while the 1997 Sculptures examines the spatial and temporal movement of the human body, both demonstrated by using the peculiar potentials of the computer. The development of photography technology is defined by mass production, user friendliness, predictable operation. The idea that anyone, with no expertise, should be able to take sharp photos with the correct color. The cameras in the print series represent an alternate direction of development. The handling of these cameras require expertise and attentiveness, and in many cases luck, too, to make good shots. Unique objects, not the results of mass production. They are also funny and ironic. Most machines are silly, ponderous, over-complicated, probably they would make weird noises when put to use. 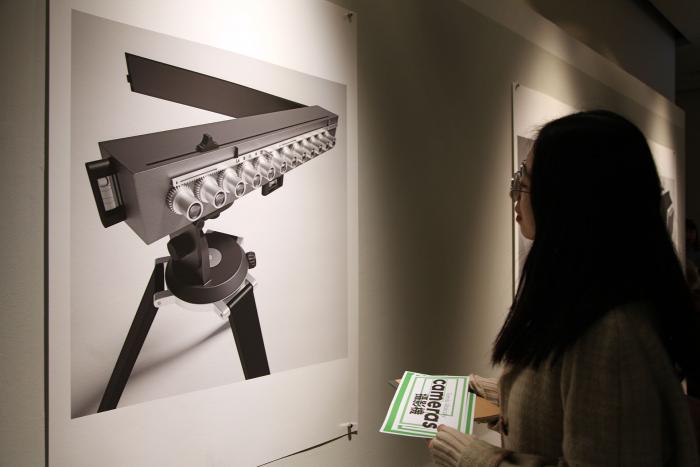 Artmagazin: For the exhibition, you’ve created animations of three of the cameras. Why was spatially circling these objects around important to you, and what were your reasons for selecting these three?
Tamás Waliczky: The prints play with the challenge of converting the three dimensions into two dimensions, which is my never-fading obsession. I’m experimenting; should I use an axonometric projection or central perspective? From which point of view should I present the objects? I’ve created these 3D objects carefully, so that the cameras may be even realized. Showing the virtual objects from more directions seemed to be practical, since I intended to offer more points of view and make the structures more comprehensible. I selected Panorama Camera (2016), Swivel Camera (2016), and Flipbook Projector (2017), because these cameras are intriguing from every angle. Unlike other cameras, which have one exciting view on print, but their backs may be a simple metal plate. Compared to the prints, the animations have a secondary role at the exhibition, as the three animations primarily serve to spatially present cameras that are displayed in 2D depictions on the walls. Formerly, the animation used to play the main character. 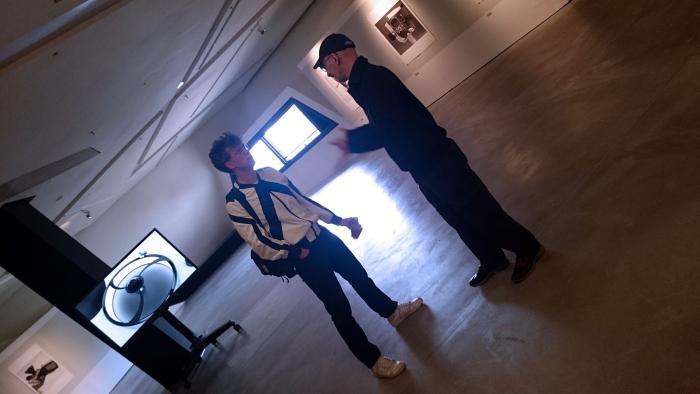 Artmagazin: What does interesting composition mean? How can a camera have an interesting composition?
Tamás Waliczky: Not the camera’s composition is what’s interesting, but the way I’m presenting it in the picture. I really enjoy assembling these objects so that they match their functions. I’m trying to shape crews and cogs in a visually captivating way; their form, their reflection, their shadows, or the gap between two screws. What I do is a traditional art practice, consisting of the arrangement of heavy and less-heavy patches of color on a square-shaped, 2D surface, charging its appearance with tension.

The graphic series Cameras and the video works will be presented in Budapest at the Molnár Ani Gallery in July, 2018, and in Hong Kong at the Lumen Visum Gallery in September, 2018.
Art historian and curator Anna Szepesi has been working with Tamás Waliczky since the early-1980s as an art consultant.

The translation of this article was created with the support of Summa Artium.