Flowers with human faces, salamanders, hermaphrodites, kind freaks, liberating demons; art opening a door to chaos. Or, what if what we considered chaos so far, is closer to us, than order is?

During recent years, Ádám Ulbert’s presence in solo and group shows in Budapest was sporadic. Living now in the Netherlands, Ulbert was a cultural anthropology and film theory student at ELTE, before studying as an artist first at MOME, then at the Sandberg Instituut in Amsterdam. He has been between Budapest and Amsterdam for ten years. Comprising 3d animations, drawings, paintings, sculptures, and texts, his series (or groups of works, rather) examine the surfaces of transition and transitoriness, the fine web of overlaps between different disciplines, deconstructing and reinstalling them in new networks. He is intrigued by the fractures in seemingly impenetrable separations and cultural narratives. His manifold collection of references on aesthetics, philosophy, and cultural and ideological history questions the binary separations of Modernity by leveling the slippery fields of religious history, superstition, folklore, and the subconscious. Writing on such collections in not easy. Actually, it is quite difficult, because despite its generous allusions to theoreticians (Foucault, Bataille, Bruno Latour), apparent to researchers, the fundamental junctions in Ulbert’s art belong to the sphere of magic and the spirit world.

One such junction is the science of alchemy, an occult trickery compared to „ordinary” sciences, as far as today’s understanding is concerned. A product of the Middle Ages, a dark, mysterious pseudoscience trying to turn metal into gold and helping to dodge death with the elixir of life. Simply put, black magic. Still, it is also a metaphysical methodology struggling to purify and glorify the soul, according to which it is not possible “to handle the substance and reality without handling all the possible additional parts.”[1] The alchemist’s gaze observing and also controlling the conversion of different substances has materialized in a condensed form in Dialogical Co-Dissolution (Trapéz Gallery, 2013). The exhibition was a model of the scholarly study on the two- and three-dimensional transformations of the rose quartz. A modest, analytical space of attention monitoring the renewal of the quartz on a clean worktable. The attempt to realize a horizontal web of picture, video (3d or watercolor animation), and sculpture, is a central aspect in Ulbert’s art. While medial fluidity had in 2013 directly appeared through the theme of alchemist science, alchemy as a source has become part of a search for spiritual substance, and medial transformation of a strange, archaic maze of prehistoric animal representations and various religious and Jungian psychoanalytical symbolisms.

The maze of the spiritual world is opened by the monster; the freak is one with what it introduces, the other, the unknown, and the crisis. What if we did not try to read different cultures based on their local characteristics and historical facts? Moreover, what if we did not even observe cultures, but discovered the very monsters they had created?[2] In his Dialogical Co-Dissolution, Ulbert subtly addressed these monsters, the scientific freaks of alchemy, and in his dual series Thalassa, he set them free. The rose crystal is replaced by the deformed figures of deep-sea life surfacing and spreading out on pastel drawings and neon-lit totems assembled from timber and metal. A screen in the middle, with a narrated movie set in a backward-streaming ancient sea. Histories and images bond and then divorce, such as water running through the spine, and the ancient memory stored in its molecular structure; or the trauma of gaining consciousness, through the story of Hulk, Dr. Strange, and Mr. Hyde, where Hulk, to escape his peripheral exile, has to awaken his own monstrous persona. Here, the precise, mathematically detailed formula of earlier material transformation is replaced by contemplation; a long, associative web of references on collective memory, the actual limits of the psyche, the conscious and beyond. Ulbert situates the monster on the border between nature and culture, instinct and intellect, but instead of imagining its conditions as exile, he considers it a “messenger,” a herald (like Hermes in mythology). As far as Ulbert is concerned, the freak is a kind, and the demon is a liberating, mediator figure who reveals the unity of supposed opposites (life and death, man and woman, magic and science). In this world, the artistic expression is a rhizomatic form, a network resembling that of mushrooms, which has no central root, but expands in great many connection points. In Ulbert’s strange animism, the spirit is a character of cultural history, a creative force. It does not really matter, whether it takes the image of an iguana (Thalassa I / Subliminal Intruder, 2016–2017), a fool (Fables from the Ship of Fools, 2018), hermaphroditism (The Cave of the Hermaphrodite, 2014), or human-faced flowers and salamanders (Forthcoming Epoch of the Salamander, 2019–). Ulbert evokes the different transformations and changing cultural contexts of the spirit through a network of archaic symbols reduced into signs; and handles his own artworks not as separate paintings or sculptures, but rather as fragments of a constantly expanding discourse, the changing reincarnations of the spirit (ghost) of mediality. Mute, open-mouthed faces, totems, and anthropomorphic animal images refer to the spirit of intellect and material, and at once to­ prehistoric magic; the unity of representation and its subject from a time when reality and afterlife were not that divided. In this context, death provides the basis for the relationship between man and animal, or animals’ relationship to death, to be precise, which renders them “closer to the realm of the gods.”[3] Having no conscious, they are not aware of time, thus, their life is but a multiplied sequence of one singular moment. Ulbert presents the animal in such a frozen time, attached to a bestiary. In his Book of Imaginary Beings, Borges notes that his collection “is not meant to be read straight through,” readers should handle it “as one plays with the shifting patterns of a kaleidoscope.” Ulbert constructs a similarly kaleidoscope-like and consequently fragmented reading from his symbols. His figures freely crawl through media and time. In the second Thalassa series (Thalassa II / Fish, Volcano, Twins, 2017), rearranged from exhibition to exhibition thrice, the deep-psychological time travel is reduced to variations of three symbols; fish, volcano, twins. In the above context, the installation set up at the 2019 Paris Internationale[4] in a bathroom was the most successful in unfolding its own meanings, and not incidentally. As much as Ulbert rescues his characters from their captivity in closed historical or cultural narratives, here the installation is liberated from the “white cube” space.

Flattering ourselves that the exhibition, the exhibition space, and the art field in general, even this article, did not fall under Bruno Latour’s category of “Modern border regimes,” would be escapism.[5] In his poetic criticism of binary separations and linear narratives, Ádám Ulbert did not yet address the environment of his own art either; except for the forest of Neopangea,[6] which, in the year 3000, he garnished with Botond Keresztesi and Tom Volkaert; according to the story by Sonja Teszler, Neopangea is an imaginary time and yet an actual forest, the inhabitants of which gather in small communities to seek the collective conscious of the world beyond the material and sensual, the spiritual and virtual, the human and posthuman. In this environment, their attempt is somewhat more credible. Here, Ulbert’s snake images installed to tree trunks, the salamander and Keresztesi’s cyborg creatures standing in a field, Volkaert’s broken, “as-if-just-excavated” sculpture, truly are in a dialog, and seek shelter and a new living territory; an escape route in a seemingly permanently closed environment. The neo-pagan nesting not only serves as the exhibition’s title, it is also an artistic trend. Even if from personal points of view, and therefore in the most diverse forms and through the various branches of mysticism, it indeed is seeking the cultural and intellectual rupture central to Ulbert’s art, a way out from an enclosed, global field suspicious even of itself, from a networked, title-maniac world. It does not differentiate between artwork and reference anymore, however, it is not able to exceed itself, once stuck in a gallery space, facing the eye (I) of the Interpreter; as such, it can only repeat the very border lines it strives to leave behind. The Neopangean Nest, as well as Ádám Ulbert’s entire artistic language, resemble excerpts from a medieval utopia, or the tales of a Romantic alchemist, with letters substituted with materials, and spoken words with their interactions. That is the language his figures speak. A language toward which the current discourse on art is mostly without preset codes. In a context of general chaos, maybe it is not only art that should rethink its frameworks, concepts, and mediums; but art writing, too.

[1] “’But each element overlaps with each other’ – Interview with Ádám Ulbert,” Artmagazin Online, 2014.

[3] “’But each element overlaps with each other’ – Interview with Ádám Ulbert,” Artmagazin Online, 2014.

[5] Bruno Latour, We Have Never Been Modern. Harvard University Press, 1993.

[6] Neopangean Nest: group show by Botond Keresztesi, Ádám Ulbert, and Tom Volkaert, between April 21 and May 10, 2020. Curator: Péter Bence. The title of the exhibition is a direct reference to neo-paganism that obtains its spiritual ideas also from prehistoric religious beliefs. 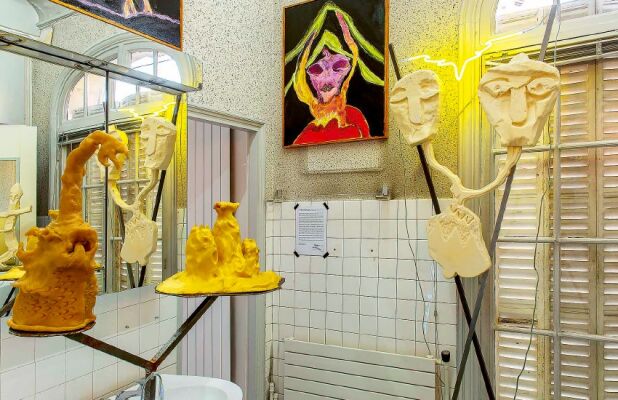 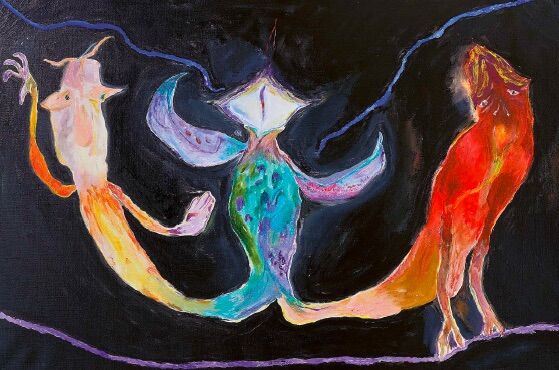