As he states in the foreword of his book titled A Report – Circle Or Curve? this publication is a first of a series he would like to make for an infinite number of projects he hasn’t made yet. His hope is that after every one of his public art projects he can create one of these Reports as a way to detail the process and show the lucky breaks or long-standing ideas that helped bring the works to life. 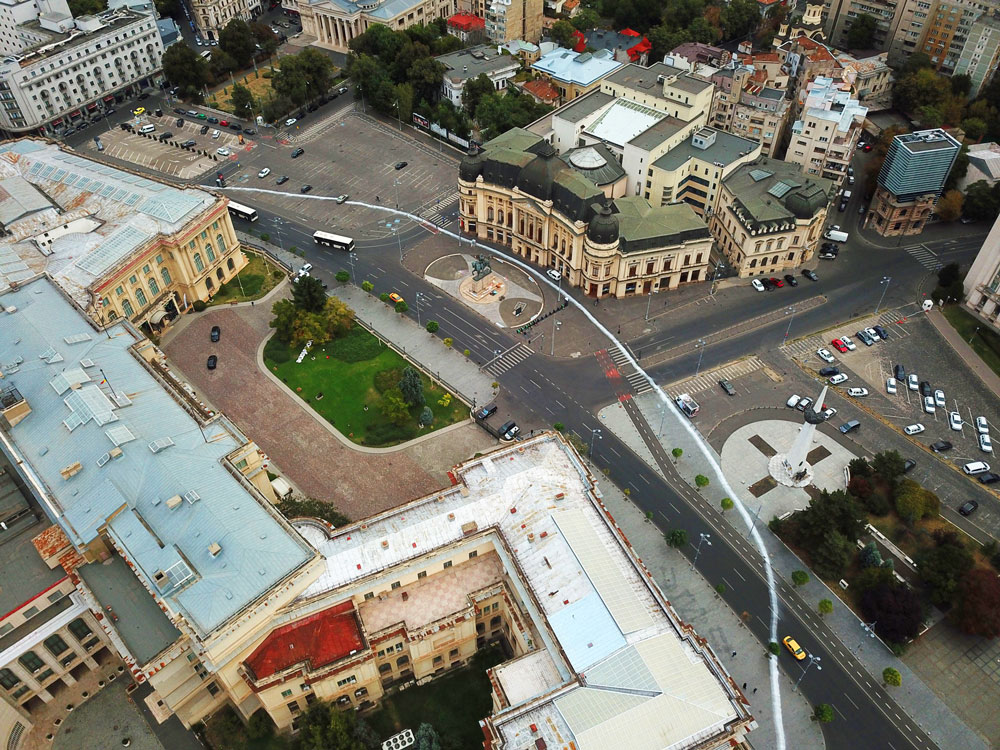 Róza Tekla Szilágyi: You decided to make the book available for free – is it partly because some elements of your project and the book echoes to what is happening now in our society due to COVID? Like COVID already inspired us to be more self-reflective by the fact that social distancing created more time that we can (it not being an option but a necessity) spend with ourselves lamenting on our own goals and ideas in life.

Andrew Herzog: Making the digital version of the book free was something I was thinking about for a while, even before COVID happened. I had originally planned to print a limited edition of books and then offer the digital version for free. Ultimately, for me, something like is successful when it’s in the hands of as many people as possible. The hope was to go to print in March, but the world had other plans. So, I decided to go ahead and release the digital version before we went to print. I don’t like to hold on to things for too long. I’d rather put projects out in the world and move onto the next thing. 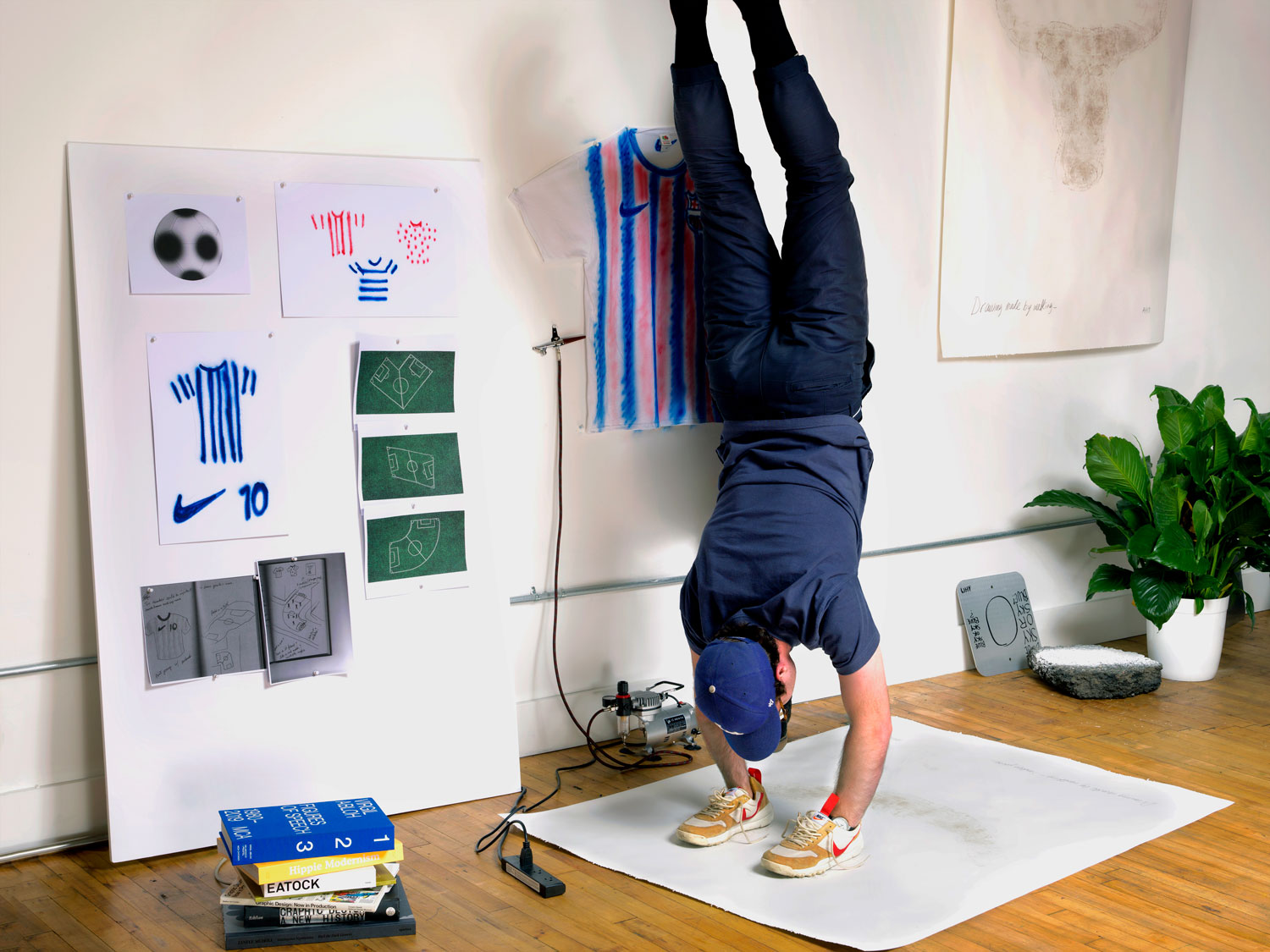 Creating a book of a site-specific and ephemeral artwork makes it more available than the site-specific installation in itself. You call it a report emphasizing that is it not a step-by-step booklet for making public art – but was there anyone who repeated or recreated your artwork even on a smaller scale after reading your book?

I’m not aware of anyone trying to recreate it. That would be interesting, though. With my work, I’m always interested in the ability to make things that make things. The thing here is a book that outlines how a rather large (one kilometer in circumference) public installation comes into being. Ideally, its existence, accessibility, and transparency make the book a thing that gives anyone the knowledge, courage, or whatever they need to make their thing. It looks at the questions that usually stand in the way of making things. Questions like: who approves it? Who asks for it? How do you propose it? Where did the idea come from? This isn’t a definitive guide to making public artworks, it’s more like a journal of the steps I took. Hopefully it makes it into the hands of someone who finds it useful.

Famous chefs are creating YouTube channels with recipes but people still go to their restaurants to eat instead of perfecting the at-home cooking hassle. With your book, you make the necessary pieces of information on preparation and tools accessible so everyone owning the information and having the will being able-bodied can create the artwork. What does it say about contemporary art?

With this book, I’m not just talking about making art. I'm talking about art literacy. I think art has a lot to offer as a language, but we’ve been told that we can’t speak this language unless we have a certain level of education or that we have to work to translate it. Rarely do we see the man behind the curtain. I don’t think this book says a lot about the current state of contemporary art. Hopefully it says a lot about the future, though. I think it’s easier to appreciate the “Famous Chef’s” meal when you’ve tried to do it yourself. Or when you know how it’s done. Most people have tried to cook at least once in their lives. Not everyone has tried to make art, but when it’s broken down the process can be accessible. That’s not to say authorship doesn’t play a role in the perceived appreciation of art. But, it’s not the only aspect that creates value in the existence of a work of art. As we become more familiar with tools that facilitate creation – cameras, videos, computers – through the evolution of technology, I think contemporary art will have to show more of its process in order to create a larger share of appreciation that's only possible through accessibility, openness, and education.

Circle or Curve is a site-specific outdoor project but you have kept several of the habits coming from the typical museum or gallery-based exhibitions – like having a "wall-text". Do you think these reminders helped people to perceive your work as art?

I want people to know they’re looking at art, even though not many will see the wall text, having it helps create the context for the work. As Duchamp tells us, the viewer is partially responsible for conferring the distinction of art on a work. In George Dickie’s book Art and the Aesthetic: An Institutional Analysis he talks a lot about this process. I think this collaboration process between the viewer and the artist is especially relevant when the work lives in public space. For those who saw the wall text it provides some context or means to challenge the work. Either way, it offers further engagement and the ability to conversate with the work because it’s placed within the vernacular of art.

Circle or Curve was realised in Romania, a country that was only 30 years removed from a revolution and public execution that ended communist rule within the country. So say in your book that Romanians were understandably prudent about approving public interventions. No one wanted their signature on the paperwork that led to the incitement of public disturbance. How much did you know about the whole history of the last 50 years in Romania before going there?

I would first say that I don’t think a work like this could have been created in a country like the United States. Romania was a key piece of this work existing and I am forever grateful to the country for allowing something like this to take place. While they were prudent, I think anyone, anywhere would have been. The work was massive, and the trust that it necessitated was equally as huge. Before I proposed the work, I spent a fair amount of time researching Romania and its history. I also have friends from Romania, they were a vital component of this work. I think it’s important for artists making work anywhere, whether it be another country or state or block, to be conscious of that places history and acknowledge the implications of their work existing there. Artworks that live in the museum have the privilege of living in a vacuum. Public art doesn’t have the same privilege. Instead, public art lives among everyone – some people will know what it is and what it means – most will not. I think that’s something important to keep in mind when creating work for public space. It shares its context with the place it exists within.

Who were your inspirations? When I saw your work Richard Long's Sahara circle from the eighties and his A Line Made by Walking, Robert Smithson's, Michael Heizer's works and even the meme video about a cat who is walking in his owners' flat on the same route every day came to my mind.

To be honest, I didn't know of Richard Long until after this work was created. I come from outside the “fine art/contemporary art” world, so my artistic reference list was fairly short when this work was created. I now know of Long’s, Smithson’s, and Heizer’s work, although I can’t say I’m familiar with this cat you mentioned, but I think I would be a fan of their work too. I’ve found more alignment, inspiration, and ultimately guidance from the work of David Hammons, Mierle Laderman Ukeles, Agnes Denes, Andy Goldsworthy, Theaster Gates, Francis Alÿs, Lygia Pape, Martine Syms, Olafur Eliasson and artists of that spirit. That was the other reason for making a book like this; I’ve learned so much from being able to read interviews and just pour over the work of these artists in the books and online. Without those resources and their honesty I wouldn’t be making the work I’m making now. Knowledge is power. 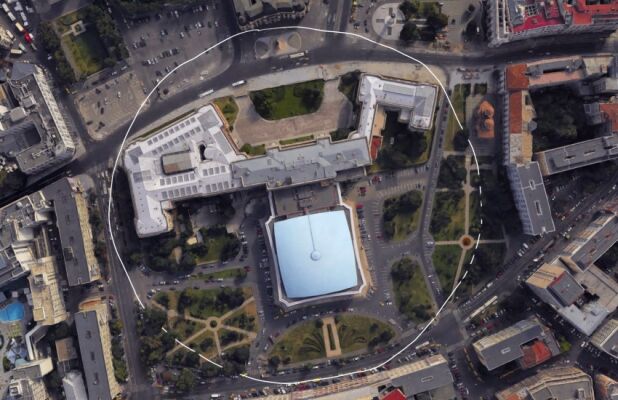