You go down into a renovated cellar of a baroque castle in the middle of a sparsely populated village in South-West Hungary to find an unexpected exhibition of an emerging Hungarian artist. The contrasts between the extremely sizzling summer sun and the natural coolness of the basement creates tense atmosphere for Lili Agg’s installations.

Very often Agg's starting point for an exhibition is an allusion to a single image. Previously she had references to found images from literature, art history, biology or memories. In this case, her attention was caught by an obscured area on Google Earth Map, above the Jeannette Island in the East-Siberian Sea. This black splotch, ideal phenomena for different conspiracy theories, is created by a digital data error which leads the attention toward the role of the leading online platform in conveying an image of the world. 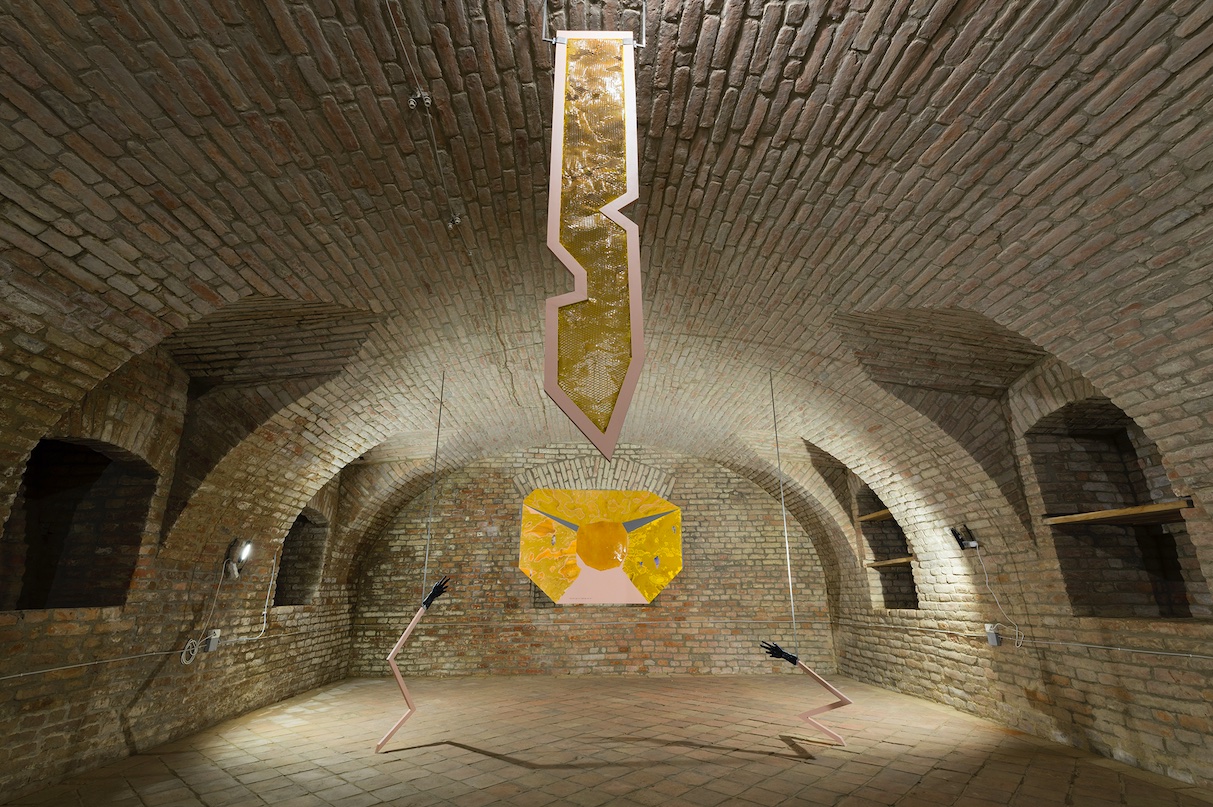 This glitch inspired Lili Agg to imagine a utopian place, abstracted into a big angular painting. The Possibility of an Island is standing on the floor facing the viewer. The warm yellow colours of the sun, almost golden, are contrasting with the arctic bluish metal colours, both in the painting and the supporting structure. Above these dominating colours, light pink, fragile hands of a human being are stretching towards the sky.

Behind the desired island, we see a fragment falling from the ceiling, entitled Anomie, a perforated zigzag sheet in a frame. Anomie is a word used in economy or sociology for “social instability resulting from a breakdown of standards and values” or “personal unrest, alienation, and uncertainty that comes from a lack of purpose or ideals”. 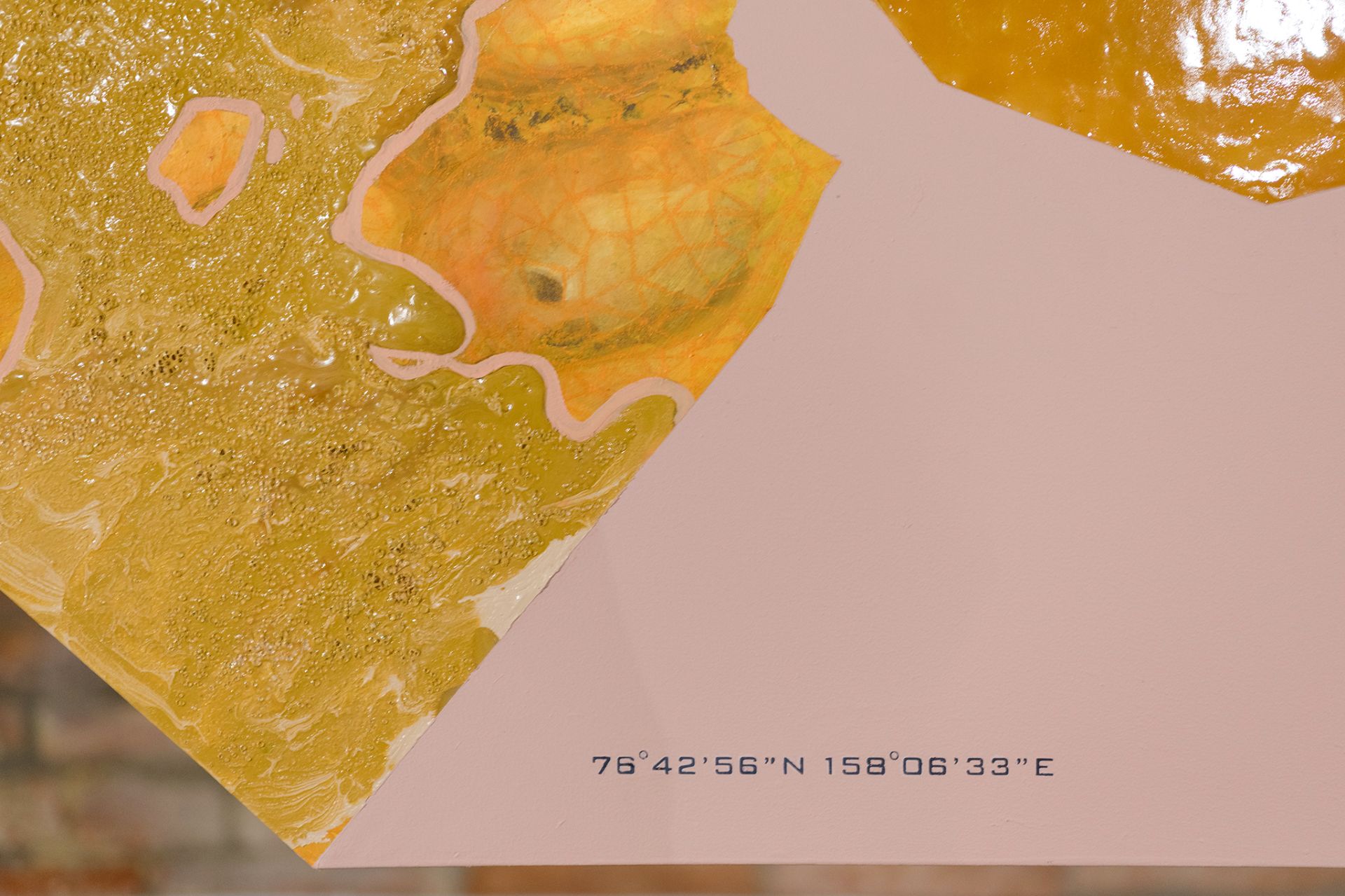 Moving on, the 3D printed hands, Shackles, try to reach something, as a metaphor for the problematics of the current social structure and common values, and the difficulty of changing old well-established systems. This something may be the last painting, the golden Melting Utopias, which propels us deeper in our thoughts about our future possibilities in creating (at least temporary) utopias.

To broader the exhibition with a sonic aspect, Lili Agg invited the contemporary music producer The Stanley Maneuver for the opening of the exhibition. The concert gave a personal interpretation and opened a way for the reception of the art works. The electronic music has a wide scale of sounds which was able to create calmness and peacefulness until you imagined yourself being elsewhere and suddenly some digital noise makes you feel drones flying above your head and recording your most intimate moments.

The text has been written by Zsófia Kókai in the course The Art of Art Writing – From art criticism to creative writing (and back) of Louisa Elderton and Klaus Speidel at the Salzburg Summer Academy. The participation was supported by the fellowship of Erste Stiftung, Igor Zabel Foundation and tranzit.cz, tranzit.hu, tranzit.ro, tranzit.sk. 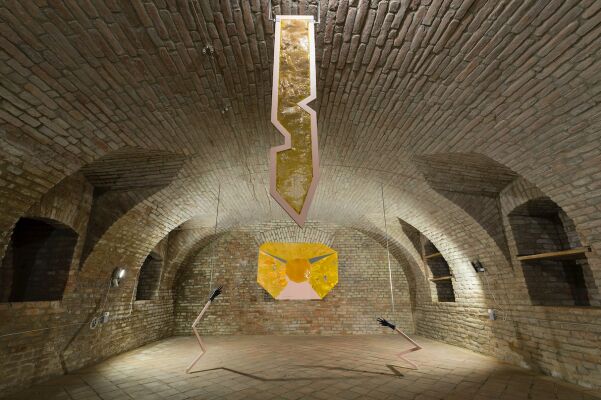